It's exam week this week and while other subjects are sweating under the pressure of external exams, we are having a bit of fun in DVC. ( Design and Visual Communication ).
Instead of trying to keep on task for 2 hours on project work, we are doing design activities.
The first one we are doing is being designers and slaves.
This activity was inspired by watching a video of the architect Frank Gehry working in his workshop with his team.
The students are sitting in pairs and one is the designer, who is only allowed to explain what they want. They are not allowed to help or do any of the work. The other student is the slave ( or "bum boy" as they put it !! ), and they can only do what the designer tells them. They are not allowed an opinion or to make decisions themselves.

They have white card, a pair of scissors and some tape. That is all.
Their task is to design and make a model of a road side bus shelter.
They have 40 minutes to create their design then we swap over.

Here they are just as they were getting to the end of the first session. 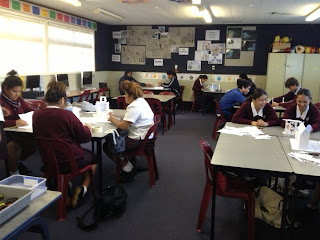 Feedback from the students is that it is hard to just give instructions and not do it themselves. They are frustrated at not being able to help and do it themselves and find it hard to just describe and explain what they need someone else to do. It equally hard for the slave, as they have to try and understand verbal instructions about a design they know nothing about.
They didn't realise that I was checking out their communication skills!!!
I am interested in the fact that they did not find the 40 minute time constraint to be the main issue. If this is the case, why can't they get their course work done on time when they have weeks!!.
Watching them during the second session, it was really evident that the students who had just been the slaves and were now the designers were finding it really hard to keep their hands off the work.

For voting, they have been asked 3 questions on a Google form.
1) Which design will best protect the passengers from bad weather?
2) Which design looks like it will fit onto the side of a normal road?
3) Which design is the best overall looking shelter?

Here is the link to the form responses.

I was reading out the results as they were coming in to the Google form response sheet. It inspired them to get the voting done if they didn't agree with what was coming in. I suspect a mild bit of cheating here even though they weren't supposed to be voting for their own ( note to self - collect emails next time!! ).

Here are their designs...